The Size of a Mustard Seed – Umm Juwayriyah

Jameelah Salih is a 27 year Muslim woman born to what appears to be one of the inner city’s stronger blended American Muslim families. She works as a hair stylist with her two best friends in the city’s only Muslim women’s owned and operated hair salon, Covered Pearls. On appearance and material possessions alone Jameelah seems to be doing okay. What most don’t know is that she is one traffic jam away from losing control of her life. Post 9/11 stresses seem to be creating negative impacts on everyone around her. Jameelah feels as though she is walking on eggshells and questions her own place in society. She prays for a change, but what will she do if change actually comes?

When a prominent Imam proposes marriage to Jameelah she feels as if it’s the blessing that she has been waiting for from Allah. She knows marrying him will change her life, but when unexpected crisis erupts and family secrets are exposed, Jameelah is forced to make hard choices and put her complete faith in the only One unable to break it.

“You see, my sister Hind has Autism. And I know that sounds like a really big word, but it’s not. Autism just means that Allah made her to learn and act and think differently than other kids her age.” In the story Hind’s Hands, big sister Juwayriyah learns just how special her younger sister is, despite the challenging behaviors that she often has to deal with.

Author Umm Juwayriyah collaborates with her oldest daughter, Juwayriyah Ayed on this book to help spread awareness about Autism.

Wendy Meddour, A Hen in the Wardrobe: Ramzi’s dad is acting very strangely. He climbs trees in the middle of the night, and even goes into Ramzi’s wardrobe looking for a hen. The trouble is, he’s sleepwalking because he’s homesick for his native Algeria. So Ramzi, Dad and Mum go back to Dad’s Berber village in the desert region of North Africa, and Ramzi meets his Berber grandmother and cousins, and even braves the scary Sheherazad. But can Ramzi help his dad and what will happen when they get back home again. This is a funny, heart-warming family story by an exciting new author, set in Britain and Algeria, with fascinating glimpses of traditional Berber culture and lots of colourful characters.

Rose was ready to sign up Keysha as a Hijab Ez Friend. She wasn’t expecting Keysha to reply with the suggestion that she become a temporary member of the Hijab Ez Friends. Keysha was frank when she said she grew up in an urban African-American environment and had never hung out with girls who were racially and culturally different from her. 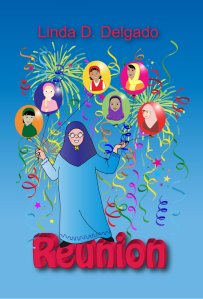 Rose wasn’t prepared for Sammie when the first words out of his mouth were, “Whatcha lookin at white girl?” Keysha was quick to explain that her eight-year-old genius IQ brother had a big chip on his shoulder and was always getting into trouble with a capital ‘T’ because of it.

When Keysha asked Rose and the Hijab-Ez Friends if they could help her find a way to help her brother with his identity crisis, the Hijab Ez were more than ready to dig in and just like old times create a PLAN, a Sammie PLAN, to do just that. http://islamicrosebooks.com/book-5-reunion/

beautifully crafted book that has something in it for just about everyone. 84 Original International recipes, 20 food specific aya and hadith,11 informative articles about healthy cooking and eating, articles about some of the most commonly used herbs and spices, 10 wonderful stories about converting to Islam or finding ones’ faith and a Glossary . The book’s content was contributed by the talented members of the IWA organization and was published by Muslim Writers Publishing. http://www.islamicbookstore.com/b11558.html

Dawoud Kringle, A Quantum Hijria: Rock guitarist Russell Peterson thought he understood reality. His life and career were comfortable, and his destiny seemed clear. A chance meeting with a Sufi mystic musician named Hassan begins a domino effect that propels him into an adventure and spiritual initiation where he faces unpredictable dangers, unimaginable rewards, and a world where the lines between science and the mystical experience no longer exist.

Yahiya Emerick, Alhumdulillah, I got a coloring book printed in Spanish. It’s called, La Sorpresa Grande de Janita. It is the same as the full color story of the same name, but this one has line drawings of the story for coloring activities, rather than full color artwork like the original. Even though there appears to be no market at all for Muslim-themed story books in Spanish, I see a need in the future for these, so I will help lay the groundwork now! See it at www.ifna.net/booksinspanish.htm